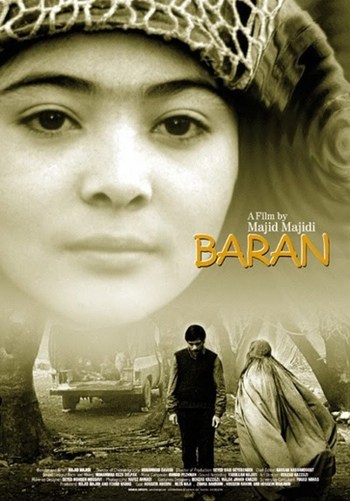 Baran is a 2001 Iranian film directed by Majid Majidi. The movie is set in Turn of the Millennium, when during Taliban years a large number of Afghan refugees live on the outskirts of Tehran, most of them as unregistered workers.

The protagonist is Lateef, a 17-years-old lazy tea boy for a building construction site managed where most of the workers are unregistered Afghans. One day one of them, Najaf, falls from the building and breaks his leg which makes him unable to work. The next day, Soltan, another Afghan worker, brings in Najaf's son Rahmat, who is around 14 years old, to replace his father. Memar, the site foreman, soon realizes that Rahmat is too weak to work in a construction site, and switches jobs between Rahmat and Lateef, who is now old enough to work as a mason. Lateef picks in on Rahmat mistreating him at every occasion. One day, by looking through the door of the storage room where Rahmat prepares the dishes, he is totally shocked to discover that Rahmat is a girl, Baran. Our Lateef seeing Rahmat/Baran combing her long hair (which usually keeps weel-hidden under an hat) becomes instantly smitten with her and acts as her secret champion, in an increasing desperate questor keeping her out of trouble.

The film was fairly well-received in Iran and outside, showing also the harsh condition endured by Afghan refugees, who despite getting in and out Iran from Soviet Invasion of Afghanistan are never granted much rights in Iran or elsewhere they usually head.