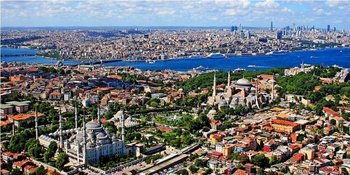 View of the European side, with Hagia Sophia (right) and the Blue Mosque (left) in the foregroundnote That strait in the background is the Golden Horn, a branch of and not the actual Bosphorus Strait separating Asia and Europe, which is located just behind the camera.
This is an ancient city of many names. To the Greeks it was Byzantium (its original name). To the Romans it was Constantinople note However, use of the name Constantinople stuck for some Turkophobic westerners up until the 20th Century as well as in Modern Greek (even in colloquial Modern Greek, it's either "Stamboul" or "Konstantinoupoli"). To the Northmen who served as Hired Axes it was Miklagard ("Big City"). To its longtime Armenian minority, it was Bolis. And to the Turks who now possess it, it is Istanbul.note Though this is a more recent development than most people think. The name "Istanbul" has been around for a very long time, it wasn't until the 18th century that it became official. For nearly 300 years the Ottoman Turks officially called the city either "Ḳosṭanṭīnīye" (the direct translation of Constantinople into Turkish) or "Rûm" (Turkish for Rome, reflecting Constantinople's status as "Second Rome" and the Ottomans' belief that by right of conquest they were the successors to the Roman Empire. It was built on the Bosphorus strait between the Black Sea and the Mediterranean; legend has it that its first settlers saw a previous settlement nearby and were amazed at how greatly they missed the boat. Istanbul does indeed have an ideal site being at the crossroads of several travel routes; indeed in some ways it is too ideal: every prince and his cousin wanted this city and it has endured seventeen sieges in its history. Fortunately its fortifications were a wonder of Medieval military architecture being something of a man-made cliff of insanity, so the city has endured only two sacks; the Fourth Crusade, and the Ottoman Conquest in 1453.
Advertisement:

While there are several countries that can claim the title of "transcontinental" (Turkey included), Istanbul has the distinction of being the only transcontinental city in the world,note  Transcontinental if you're Eurocentric that is (which everyone is, no matter how hard they try to deny it). Europe and Asia, after all, never have a clear geographical distinction. though it originally wasn't built to be that way; the Ancient Greeks built the old city of Byzantium only on the European side of the strait. Only when it was reconstituted as Constantinople during the Roman period did it eventually expand into Anatolia (which in antiquity was the original, letter for letter, "Asia". What people now have in mind when they think of Asia received individual names per regions, e.g. Persia, Hindus, Palaestina...). This city is also proverbial for its Gambit Pileups and is the only city in the world to actually be an adjective for such things, as it is after all, very "byzantine". This tradition continued into modern times and as late as World War II (and no doubt later) it was an important espionage battleground. It is nevertheless the home of some 14 million people, being the largest European city (yes, European; most of Istanbul is located in Eastern Thrace) and the fifth largest Muslim-majority metropolitan area in the world (after Jakarta, Karachi, Cairo, and Dhaka).

Today, its name is Istanbul (Not Constantinople).

After some years in obscurity Byzantium became the secondary capital of The Roman Empire because of the growing importance of the eastern parts. Constantine the Great made it his main capital and named it Nova Roma (New Rome), but it later came to be known as Constantinople (Literally "Constantine's City"), in his honor. When Rome fell, Constantinople survived as a sort of Government in Exile of The Roman Empire, known today as the Byzantine Empire. By virtue of the professionalism of its soldiers and the cunning of its rulers it was able to survive in this capacity for about 800 years after the fall of Rome. It was finally conquered by the Ottomans in 1453, ironically under the reign of Constantine XI, who was killed in the Last Stand of the Byzantines note  adding to the myth that Constantine XI became "The Marble Emperor" who will one day retake the city for the Greeks, since the conquered Greeks never acknowledged that the corpse that the Ottomans found was that of Constantine XI . This remained the capital of the Ottoman Empire until its collapse in World War I, when the City was temporarily occupied by Allied forces. It was reclaimed by Turkey afterwards, which holds it to this day. Another interesting issue is that Istanbul acts as the cork in the bottle of the Black Sea; no shipping can get in or out without Turkey's permission. This automatically prevents Russia from becoming a threat to major sea powers and in doing so has historically ensured the protection of same. This was part of the reason for British and French intervention in The Crimean War.

Istanbul is a multi-ethnic city with groups from all over the area having residence there. It is one of the few places in Turkey that still have an Armenian population, and Kurds and Greeks also maintain a presence as well. It is a noted tourist attraction, with such architectural wonders as the Hagia Sophia, the Blue Mosque, the Topkapi Palace and so on. "Stamboli" cooking is well noted and was once considered on a par with French cuisine. Much of the more high-end dishes in Istanbul descended from the traditions of palace chefs of the days of the Sultans. This cooking spread across the Empire and strongly influenced the national cuisines of Greece, the former Yugoslavia, Romania, Bulgaria, Albania, Armenia, Azerbaijan, the Arab World, and (of course) Turkey. Today, the Imperial cuisine continues strong in Istanbul, although Beirut and Athensnote Which imported this cuisine rather late—in the 20th century, after the "population exchange" that sent Turkish Greeks to Greece and Greek Turks to Turkey give Istanbul a run for its money. Stamboli cuisine left another legacy —the Great Eastern Mediterranean Food Fight, also known as the greatest display of culinary Misplaced Nationalism and Cultural Posturing ever, as different cultures lay claim to either being the origin of various Stamboli dishes or being the best at preparing them.

Also, there are cats. Many, many, many cats. There's also a sizable stray dog population, but cats — unlike dogs — are considered ritually clean in Islam, meaning they are allowed to go anywhere they like, including into mosques. Due to this favoured status, the cat population is left to its own devices, and as a result, they are everywhere. One of the cats living around the Hagia Sophia even has her own Instagram

.note While not domestic, Istanbul's cats are quite used to humans and are therefore significantly less aggressive than feral cat populations elsewhere in the world, sometimes allowing (or encouraging!) tourists to pet them (though do wash your hands afterward).

In media portrayals, expect to see the very large and imposing Hagia Sofia (Ayasofya in Turkish - the similar appearance of the latter two as well as other large Ottoman mosques is due to direct emulation of Hagia Sofia's design), Blue Mosque (Sultan Ahmet Camii in Turkish) and the Süleymaniye Mosque from all places in the city. This is partially Truth in Television as at least one of the three can be seen from rooftops of some of the area surrounded by the still-standing Walls of Constantinople. However, the Byzantine/Ottoman look gives way to the 19th Century relatively nearby at Galata and the Dolmabahçe Palace; and also with very modern infrastructure such as the Levent business district (not actually close to the historic landmarks, but the skyscrapers there are tall enough to be seen from rooftops near Hagia Sofia), 2 (soon to be 3) very large ( and very crowded ) suspension bridges across the Bosphorus (they have to be very large because the Bosphorus is 700 metres wide at its narrowest and because very large container ships need to pass through the Bosphorus - although the 1st Bosphorus Bridge opened only in 1973, a large permanent crossing was originally envisaged by Leonardo da Vinci in the late 15th Century, and Darius the Great of Persia bridged the Bosphorus with pontoons in order to conquer the Balkans sometime between 522 and 485 BC) and the Marmaray subway (a rail tunnel under the Bosphorus to provide a cheap and fast crossing between the European and Asian sides of Istanbul - as The Government of Turkey likes to point out, it is the efforts of not only the modern Turkish state, but starting from an idea of Ottoman Sultan Abdulmajid in 1860).