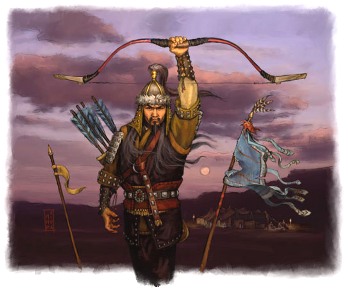 With Heaven's aid I have conquered for you a huge empire. But my life was too short to achieve the conquest of the world. note  Image

"Conquering the world on horseback is easy. It is dismounting and governing that is hard."
— Genghis Khan
Advertisement:

Want to know why you never get involved in a land war in Asia? Genghis Khannote "Chinggis Haan" is a closer pronunciation of his name, primarily due to the fact that Mongolian and many Turkic dialects don't have a hard "c" sound, but generations of English-speakers have pronounced it "Genghis Khan" thanks to an incorrect translation of Persian, so "toe-may-tow/t'-mah-toe". However, the Chinese transliteration of his name is rather accurate: "Chengjisi Han" (成吉思 汗)。 (circa 1162 – August 18, 1227), birth name Temüjin Borjigin, is why.

Undoubtedly one of the greatest conquerors who ever lived, this guy did the impossible. He united the Mongols. After accomplishing that, he began the conquest of the rest of Asia and made it look easy. The military strategy and laws he laid down allowed the next generation to expand the empire until it ruled over 17% of all land on earth, from Ukraine to Korea, the largest contiguous land empire in history. He and his people were truly

He's mentioned far more in Chinese and especially Central Asian stories and culture than in Western Europe, the latter having had very little if anything to do with him. In Western European (and by extension North American) culture, he is either shown as a tolerant and just ruler who helped bring order in a chaotic period, or as a ruthless barbarian who slaughtered swathes of innocents for personal gain. While it's easy to cherry-pick his deeds to make him look unambiguously like one or the other, the truth is a mixture of the two. He was a revolutionary conqueror in Asia for the time in that he allowed almost total freedom of religion, did not impose on the cultures of the defeated, and established a vast and effective trade and postal network that were of great benefits to most parts of Asia - particularly given the long disintegration and decline of the Southern Song dynasty under the strain of fighting their fifty-year stalemate war with the Jin dynasty founded by the Jurchens (a Tungusic tribe ancestral to the Manchus who had taken the entire north China plain from them, thus the 'Southern' Song). On the other hand, he was absolutely ruthless to anyone who dared to resist his Mongol hordes. He was noted to have used early forms of biological warfare note While this was done knowingly, the expansion of his empire may have unknowingly played a part in introducing the Black Death pandemic to Europe more than a century after his death. This hypothesis in 2021

suggests that the marmots brought by the Mongols to the Tian Shan area during the conquest of the Kara-Khitai circa 1216 picked up a strain of plague; when the Mongols besieged Baghdad in 1258, the hypothesis is that marmots with the plague managed to infect rodents in Baghdad, laying the seeds for future devastation., used living prisoners as human shields, and massacred civilian populations as punishment for resistance. The Iranian plateau lost three-quarters of its population during his conquest and didn't fully recover until the mid-20th century. Entire cities were leveled to the ground as examples; to this day, some areas in Central Asia are disproportionately populated compared to their surroundings thanks to these 13th century tactics.

In fact, Genghis Khan's conquests possibly caused an evolutionary shift, as wild species populations in Central Asia exploded because all the humans who would otherwise till the arable lands and keep them at bay were dead or refugees; this also led to a brief reversal of global climate as the take over of farmland by forests caused a noticeable dip in atmospheric carbon levels. One of the worst Mongol atrocities was the destruction of Baghdad, led by one of Genghis Khan's grandsons. At the time, Baghdad was a jewel of world civilization since it had been the Islamic center of commerce and learning for centuries. It is said that the Tigris River ran not only red with blood, but black due to the ink from the quantity of books thrown in the river. It's worth noting that Hulagu Khan (the bloke who did all that) later got his ass kicked from the Muslim Khans of the Mongol Hordes, particularly Berke Khan. This civil war eventually ended with Nogai Khan, a Muslim, ending as the most powerful figure and kingmaker amongst the Mongolian tribes excepting Kublai Khan. Before that, Hulagu's advance into Palestine was decisively defeated by the up-and-coming Mamluk Dynasty at the Battle of Ain Jalaut.

Speaking of disproportionate population, in 2003 it was discovered that a y-chromosomal lineage found in about 8% of the population of his former territory (and .5% of the entire world) probably came from him

. His descendants — the Genghisids — made up a large part of the aristocracy of the various Imperial regions and vassals, and its successor states across Asia for centuries afterwards. Many leaders more dubiously claimed the "Golden Lineage" as a source of legitimacy, and the latest aspiring Khan in spirit was a mystically-minded Baltic German Tsarist, Baron Roman von Ungern-Sternberg.

In the 21st century, the clan name of Genghis Khan, the Borjigiin, became the most common surname in Mongolia, even among those who are almost certainly not descended from the Mongolian royal family. For decades, Mongolian communist government banned use of surnames, condemning it as an obsolete legacy of the feudal past. After the ban was lifted but original names were lost, many Mongols opted for an opportunity for Meaningful Rename, by choosing the surname of their country's greatest hero.

Note: In Korea, it is taught that after many consistent invasions and after fighting back and surviving their attacks, the Koreans grew tired of them, giving some of their land to them and then forming an "alliance". Though partially debatable, it's true that the Koreans survived their attack

5 times, and after the 6th they were "allies" with them. All of which extends to Japan, since the bulk of the army that attacked Japan consisted of Koreans under a Mongolian flag (who says being allies doesn't have its benefits?). However, that could also mean that the Mongolians didn't fail in their invasion of Japan, but Korea did. It all depends on who commissioned the historical text you're reading.

Genghis Khan's dynasty only ever commissioned one major historical text, The Secret History of the Mongols, written not long after Genghis Khan's death for the royal family. The original Mongolian manuscript was lost, but the text survived through an early Chinese translation. Only in the 20th Century did further translations (including English) finally become available. While it contains some folkloric exaggerations, it is generally considered a fairly honest account rather than the sort of glorified flattery one might expect, and is considered a major authority on the details of Genghis Khan's life. Probably indirectly responsible for a fair bit of recent re-evaluations of the Mongols as more than bloodthirsty barbarians.

Trope Namer for the Genghis Gambit.