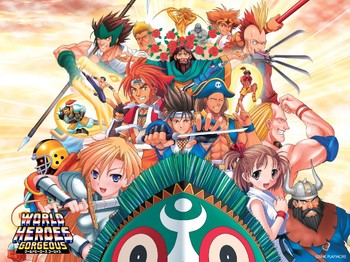 Time Travel at its finest.
Advertisement:

A series of fighting games developed for the Neo Geo by ADK and also co-created with SNK. Imagine Hattori Hanzou, Kotaro Fuuma, Rasputin, Joan of Arc, Genghis Khan, Bruce Lee, Hulk Hogan, and a Nazi super-cyborg coming together and battling each other for the right to fight an alien shapeshifter bent on taking over the world. That's World Heroes in a nutshell; a one-on-one fighter built around No Historical Figures Were Harmed versions of famous people beating the snot out of each other.

While initially largely derivative of Street Fighter, which explains its complete lack of longevity, it developed some interesting gimmicks later on by Jet and Perfect. There was also a slew of Rule of Cool involved in the character selection; the sequels added even more thinly-veiled historical personages, including characters based on Captain Kidd, Erik The Red, Joe Montana, Lu Bu and Jack The Ripper, as well as generic witch-doctor Mudman for some reason.

Unfortunately, cool characters and gimmicks weren't enough to make the series stand out, and it languished into obscurity, during only between 1992 ans 1995. The only appearance it made ever since was in NeoGeo Battle Coliseum, where Hanzou, Fuuma, and Mudman were playable characters and 2/Perfect Big Bad Dio was one of the bosses (in his form from Perfect, Neo Dio.) This is because after its bankruptcy ADK was bought by SNK Playmore and the series actually become part of the SNK's Expanded Universe. Janne (now spelled "Jeanne") also shows up in the 2018 all-girls fighting game SNK Heroines: Tag Team Frenzy as a Downloadable Content character, marking the first time a World Heroes character has appeared since Battle Coliseum.

The World Heroes series in general is possibly the most known series from ADK, being ported to various other consoles than Neo Geo, like SNES, Game Boy, PC Engine, Mega Drive and recently Virtual Console. As the years passed by, it's actually become a Cult Classic of sorts and was compiled by SNK Playmore by the name of World Heroes Anthology/Gorgeous for PlayStation 2 in 2007 as part of their Greatest Hits Compilations.

Also see the Spin-Off Aggressors of Dark Kombat, an Original Generation Fighting Game with a touch of Beat 'em Up where Fuuma appears as Guest Fighter, and World Heroes Supreme Justice Extra, an arcade Beat 'em Up game where players assume one of the various characters in the game to beat up hordes and hordes of mooks.