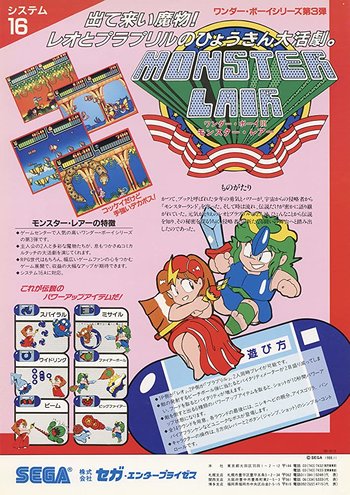 Japanese arcade flyer, depicting Leo & Purapril as well as the game's mechanics
Wonder Boy III: Monster Lair, sometimes shortened to simply Monster Lair, is the third game in the Wonder Boy series. An auto-scrolling platform game/Shoot 'em Up hybrid, it is the only game in the series to offer 2-players co-op play. Players control either the Leo or Purapril, as they set off to follow in the footsteps of Book the Hero and free their land from a monster invasion.
Advertisement:

Originally released in 1988, it was the last "Wonder Boy" game released for the arcades and saw home versions for the TurboGrafx-CD in 1989 and the Mega Drive in 1990.