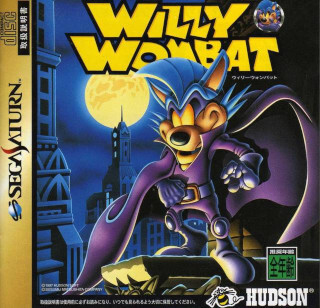 Somewhere under this moonlight is the Eden that I seek...
"Dark souls who taste the forbidden fruit...
Lost souls who yearn for freedom...
Search the foreign lands for Miracle Gems.
When six Miracle Gems reunite...
The doorway to the garden of freedom, Eden, shall show it's way."
Advertisement:

A 1997 top-down action-platforming game for the Sega Saturn released only in Japan by Hudson Soft, with all characters designed by Susumu Matsushita (the same designer for both Adventure Island and Motor Toon Grand Prix). The game stars the titular Batman-esque wombat who is a drifter in a post-apocalyptic world populated entirely by animals. The story itself is surprisingly hard to follow due to little set-up and the character interactions being rather random and surreal, though essentially Willy, previously a high ranking general in the police force of a totalitarian civilization by the name of "Prison" one day stumbled upon data concerning mysterious artifacts by the name of Miracle Gems and a mysterious realm by the name of Eden. After reading through the data and discovering an Awful Truth, Willy is convinced to break out of prison and begin traveling through the world in search of the Miracle Gems. Along the way, he meets an old dog by the name of Java who claims to know about the Miracle Gems and is willing to assist Willy in his hunt...for a price. Meanwhile a trio of elite officers from Prison named Notes, Mail, and Tagdor are tasked with hunting Willy down and getting to the bottom of what made him go rouge. You control Willy as you explore the abandoned ruins of the post-apocalyptic world solving puzzles, fighting through endless hordes of ghosts and doing your best to evade capture by the Prison elite. The most stand-out element of the gameplay is the ability to control the camera unlike other top-down games at the time. Unusually, though the the game was only released in Japan, it utilizes a full English voice cast.

Surprisingly, this game actually had a large impact on the name of a famous video game mascot: Crash Bandicoot. Early on in development, Crash Bandicoot was originally named Willy Wombat, but Crash's creators, Naughty Dog had later discovered that the name itself was already taken by this game, which had soon led to the name change in due time. Sadly unlike Crash, Willy's game only received decent reviews and quickly faded into obscurity.