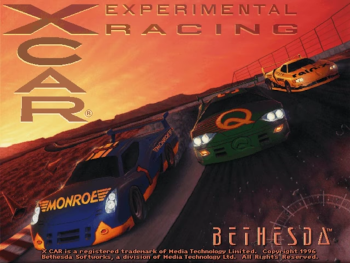 XCar: Experimental Racing is a semi-simulation Racing Game developed by Bad Dog and released by Bethesda Softworks in 1997. It is described by its developers as a racing game that features close-wheel, closed-cockpit Super Prototype racecars, as well as its own blend of motor-racing rules. Central to the game is its heavy emphasis on Design-It-Yourself Equipment—the performance of the car you use to race can be adjusted in many ways, ranging from engine to aerodynamics. There is no progression system—you can switch between all the available cars in the game and modify them as you wish. The only thing that matters is how your car performs on the track.