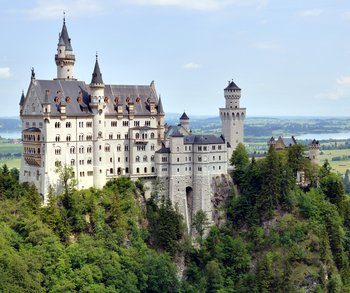 in Bavaria, Germany.
"Girl let's go back to my place
Nothing fancy, just a huge mansion in space."
— Danny Sexbang of Ninja Sex Party, "Dragon Slayer"

It's absolutely fine for a character to own a castle, especially if they are royalty, but some take it too far. This isn't just a large castle. This thing is absolutely ENORMOUS and usually sprawls hundreds of acres and is filled with traps, guards, Secret Passages, hidden rooms, Elite Mooks and at least one throne room in the center. Bonus points for a moat made of lava, or if it's floating in the sky. Or both.

Getting lost within one of those things, now THAT would suck. Sometimes these things are near impossible to navigate without a dungeon map. Made worse if the castle starts shifting around on its own.

These are often the lairs of the Big Bad, but heroes often have Big Fancy Castles of their own especially if they're royalty.

A subtrope of Big Labyrinthine Building. Compare to Big Fancy House. See also Bright Castle. If the size and elegance of the castle are a symbol of the owner's Hubris, see The Tower.

Because of the ancient, military nature of castles, they're often haunted.