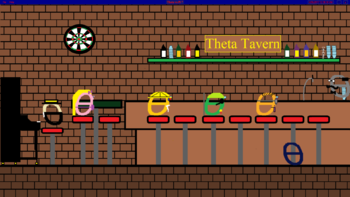 The seventh game in the Theta vs Pi series. It is the first of the series to be made available for the PC (previous instalments having been built for graphics calculators) and brought Theta and Pi to the world of colour. It was followed in 2019 by a sequel which included updated graphics and gameplay.

You play as Theta who is literally the Greek letter theta. He is a member of a species of all of whom are thetas, but can be differentiated due to the others wearing clothing, having hair or in one case being female (he seems to be the only "classic theta").

The mooks in the game are pi symbols. Theta has to fight through a mixture of stock standard pi, pi who shoot, pi with spikes, pi with wings and pi fish.

Every seven levels there’s a castle which ends with a boss. Bosses typically fall slightly higher on the Sliding Scale of Anthropomorphism (as much as that concept applies in this context) having things like faces and, in many cases, a somewhat more humanoid build while still being based around the same concept.

The game is available for free here

Theta vs Pi 7 contains examples of: