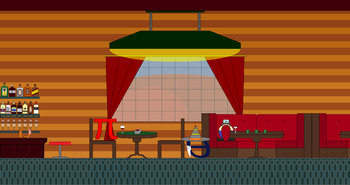 New land, new enemies...still the same old Theta.
The eighth game in the Theta vs Pi series and the second to be made for PC.
Advertisement:

After the ending of the last game, the Theta and the Pi are finally at peace. However, a new enemy has emerged and started launching attacks against both groups.

Theta must journey across the sea to find the source of the attacks and stop them before it’s too late.

The game can be played for free here

Theta vs Pi 8 provides examples of: