Horse of a Different Color 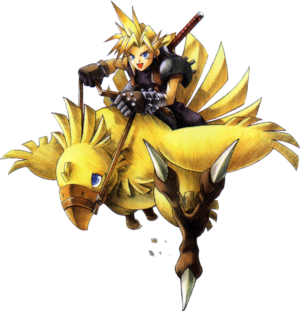 Giant yellow birds are the mount of choice for the spiky-haired RPG hero on the go.
"Good bird-horse-thingy."
— Sokka, Avatar: The Last Airbender
Advertisement:

Evolution being what it is, alien worlds (or Earth time periods far removed from the present day) are bound to have different forms of animal life from our world. The people there, however, are usually just like us, or close, and would therefore develop different breeds of livestock to fill the same needs.

Of the types of creatures available, large flightless birds are probably the single most common type of horse-replacement. Two-legged non-avian dinosaurs also come up frequently. To replace the larger draft animals, vaguely ox-like creatures and large lizards seem to be popular, and some may be Mix-and-Match Critters.

Evil, bloodthirsty races will often use a giant form of a common predator, like a wolf. Cats are a mixed bag; they are predatory and notoriously disobedient, but both heroes and villains can be seen riding them and performing great feats of sure-footed trick riding.

A flying creature that can be trained, and can carry a man, is truly the holy grail of animal husbandry. Most fantasy settings have at least one, either a scaled-up version of a currently existing creature or something from prehistory or mythology. Dragons are especially popular in this department as are Gryphons and Pegasi.

For maximum Speculative Fiction cred, try having the mount not even being made of flesh and blood. In video games, these often become a Power-Up Mount.

Named for an idiom meaning "another matter entirely", and a pun on that phrase in The Wizard of Oz which was a literal horse with an ever-changing coat.

Subtrope of Fantastic Fauna Counterpart. Sister Trope to Chariot Pulled by Cats for unusual draft animals and carriage pullers. Compare Call a Rabbit a "Smeerp", when the animal actually is, for all intents and purposes, identical to a real-world animal. Super-Trope of Zebras Are Just Striped Horses, Kangaroo Pouch Ride, Seahorse Steed, and War Elephants, and sometimes Domesticated Dinosaurs and Our Centaurs Are Different (if they let people ride them). For actual horses (or other animals) with unusual colors, see Amazing Technicolor Wildlife.

Nothing to do with the album of the same name by Big & Rich.

Flightless Birds and Other Bipeds

In order to reach his Bounty, The Mandalorian must learn how to ride a Blurrg.

In order to reach his Bounty, The Mandalorian must learn how to ride a Blurrg.