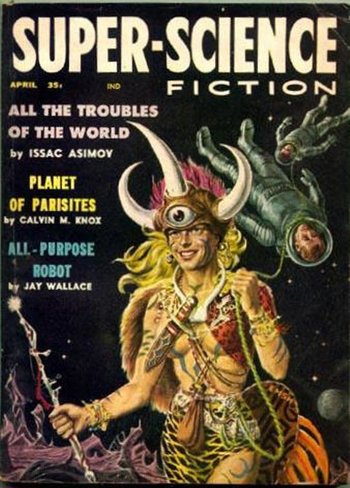 "All the Troubles of the World", by Isaac Asimov
"Planet Of Parisites", by Calvin M Knox
"All Purpose Robot", by Jay Wallace
Advertisement:

Created by the parent company of Crestwood Publications, Super-Science Fiction was a bimonthly Pulp Magazine, printing a Genre Anthology of Science Fiction stories every issue. The Chief Editor was WW Scott, who managed the series from its founding until its cancellation; December 1956 through October 1959.

Each year was numbered as a separate volume, and starting from April 1959, Scott tried to market the magazine to fans of Monster Horror films, competing with Famous Monsters Of Filmland. For the "Special Monster Issue", Scott required that all stories include some sort of monster. This attempt to retarget their demographics did not work, and the magazine closed down by the end of the year.

Robert Silverberg created an anthology based on his experience as one of the magazine's authors, titled Tales from Super-Science Fiction. It includes an introduction by Silverberg where he reminisces about what he learned by submitting stories to the magazine.

Not to be mistaken for Super Science Stories.