Literature / All the Troubles of the World 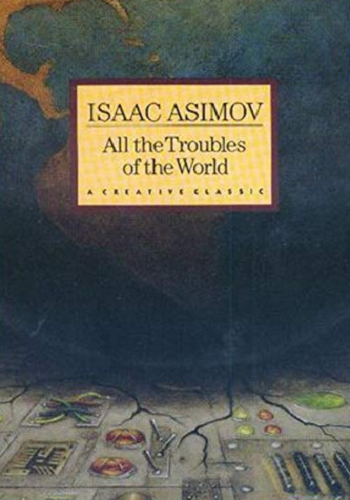 First published in Super-Science Fiction (April 1958 issue), by Isaac Asimov. This is a Science Fiction Short Story about a murder mystery taking place before the murder. It was republished in 1989 as a 32 page children's book with illustrations by David Shannon.
Advertisement:

The story begins with Exposition about what Multivac is, and its role in human society, before giving us the Point of View of Bernard Gulliman, Da Chief of all police in the world. He's noted that there are two instances of murder on this morning's criminal predictions. Shifting to his subordinates, Ali Othman and Rafe Leemy, are talking obliquely about a crime that Multivac predicted could result in The End of the World as We Know It.

In Baltimore, Ben Manners attends the graduation of his brother, Mike, into adulthood. As children, their parents were responsible for recording the data into Multivac. Now that Mike is an adult, he will be uploading his own personal data, including his inner feelings. Because of the billions of adults sharing data with Multivac, it is better able to predict human behaviour and anticipate dangers they might face.

Coming home, Ben discovers his father, Joseph Manners, has been placed under house arrest, and the home is surrounded by police to ensure his imprisonment. However, they won't explain why he's been arrested. Switching back to Othman and Leemy, they're nervous because imprisoning Mr Manners has made the probability of the successful crime rise instead of fall.

Wondering if there is a way to help his father, Ben heads to a Multivac terminal to ask it for help. Multivac responds with a cryptic set of instructions. Elsewhere, Corrections officer Leemy deduces that Multivac was reporting the actions of Ben, not Joseph, causing the probability to begin to decrease. It's then revealed the crime in question was the destruction of Multivac itself.

Ben follows the instructions given to him but is apprehended just before he inadvertently damages Multivac. Multivac is saved... for the moment. Lemmy confronts Guilliman with his suspicion that the events were all a Self-Fulfilling Prophecy made by Multivac in an effort to get itself destroyed.

All the Troubles of the World provides examples of: