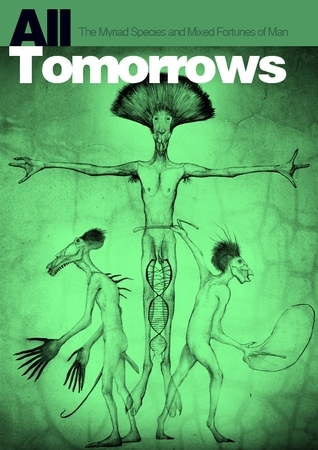 Pictured: A Bug-Facer (center) and two of his Gravital-engineered descendants
"Ultimately, however, what happened to Humanity does not matter. Like every other story, it was a temporary one; indeed long but ultimately ephemeral. It did not have a coherent ending, but then again it did not need to. The tale of Humanity was never its ultimate domination of a thousand galaxies, or its mysterious exit into the unknown. The essence of being human was none of that. Instead, it lay in the radio conversations of the still-human Machines, in the daily lives of the bizarrely twisted Bug Facers, in the endless love-songs of the carefree Hedonists, the rebellious demonstrations of the first true Martians, and in a way, the very life you lead at the moment."
— The Author
Advertisement:

All Tomorrows: A Billion Year Chronicle of the Myriad Species and Varying Fortunes of Man is a 2006 science-fiction book by C. M. Kosemen (a.k.a. Nemo Ramjet), with a heavy focus on speculative evolution. The story begins in the near future, as burgeoning population pressures force humanity to terraform and colonize Mars. After a brief but violent civil war between the two planets, the genetically engineered survivors begin a new wave of colonization, spreading across the galaxy. Everything is looking up for the human race... until the colonies encounter the Qu, technologically advanced aliens on a religious mission to remake the universe. Although humans fight valiantly, the Qu easily overpowered humanity; as punishment, these aliens decide to genetically modify the survivors, turning most of them into mindless, animalistic creatures before departing.

Then things get really weird.

The original PDF version can be accessed via the Wayback Machine.

The author's DeviantArt is here

Compare and contrast Last and First Men, to which it is in many ways the Spiritual Successor.

Love Today, and seize All Tomorrows!