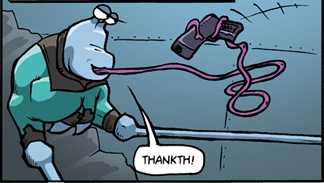 Multipurpose Tongues can do a lot more than taste, such as grasp, sting, or bash objects. A great variety of creatures could possess this kind of tongue, but they're usually reptilian or amphibians. Many characters add an Animal Motif based on their ability.

This is a very common trait for fictional chameleons and frogs, despite the fact that real-life frog tongues aren't actually prehensile or all that long. This is often extended to other reptiles and amphibians, as part of the general confusion of cold-blooded creatures that tends to go on in fiction.