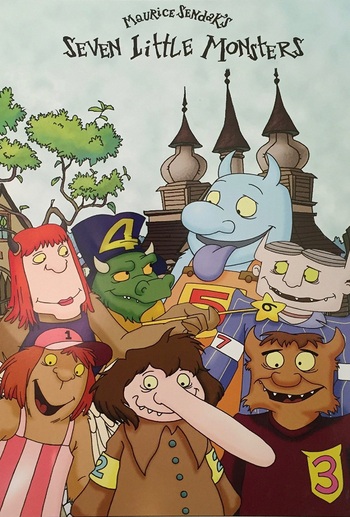 Seven Little Monsters was a book by Maurice Sendak (of Where the Wild Things Are fame) that got a 3-seasons, 40-episodes Animated Adaptation from the Canadian animation studio Nelvana, with China's Hong Ying Animation and Philippine Animation Studio Inc. helping out with production as well.

The show is about a family of seven monster siblings (five boys and two girls), who despite the title, are actually much larger than the humans they share their neighborhood with. These seven siblings, known simply by their respective numbers going from oldest to youngest, live with a diminutive, Slavic-accented old lady who happens to be their mother. While their sizes and unusual abilities and appearances seem alarming at first glance, they are all Gentle Giants who mean well and do their best to do what's right. And even despite the trouble that their individual quirks and personalities can bring on their various adventures and misadventures, the seven little monsters can always count on the love and support they have from each other and their mother as a family.

Seven Little Monsters was a part of the PBS Kids Bookworm Bunch from 2000-2002 and also aired from 2003-2007 on its home country of Canada on YTV (and later Treehouse TV). While not as successful and recognizable as its fellow Nelvana-produced Maurice Sendak adaptation Little Bear, it has gained Cult Classic status among those who watched it on PBS as part of Bookworm Bunch and later as part of its dual slot with The Berenstain Bears. Part of this was due to the fact that like Little Bear, Maurice Sendak was involved in the show's production, and thus had more significant influence over the series' development than is typical for a cartoon adaptation of a kids' book. The theme song of the show was performed by Barenaked Ladies.

Interestingly, Nelvana's cartoon is not the first effort to adapt the book in animated form, as it had previously been adapted as an animated segment on Sesame Street that was animated by Fred Calvert.

Nelvana has made episodes available on Youtube through their Treehouse Direct channel. Check them out here!