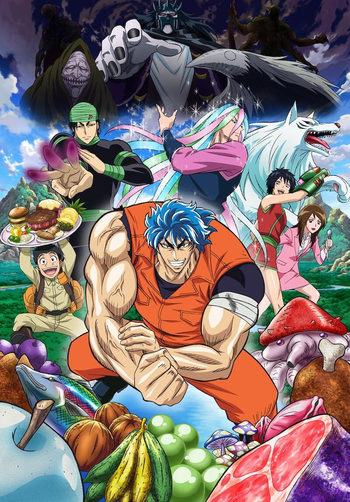 Gourmet everything!
This is the Gourmet Age, where the world's manliest heroes quest for yet-undiscovered culinary delights.
Advertisement:

Toriko is a Shōnen manga series by Mitsutoshi Shimabukuro, started in Weekly Shonen Jump in May 2008. The story revolves around the eponymous character's adventures as a Gourmet Hunter, a hunter of rare food ingredients, scouring the world for more delicious things to eat. Joining his adventures is Komatsu, a chef working at the Gourmet Hotel, and a gallery of other characters with varying personalities that make the world of Toriko a lively and colorful place.

, a crossover with One Piece has aired, and an anime adaptation debuted in April 2011 (simulcast and licensed by

After eight years of serialization, the series ended in November 2016 with a total of 396 chapters.