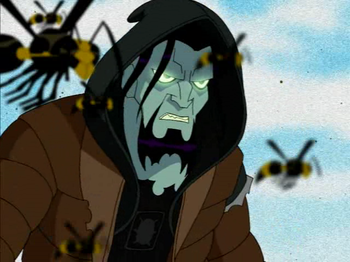 Sign: Infestation. Vermin swarm out from Wormcrawl Island under the influence of the obelisk.
— Description of the growing influence of Kyuss, Dungeons & Dragons 3rd Edition, Elder Evils
Advertisement:

The use of insects, arachnids, or other arthropods to indicate a greater evil.

Bugs are creepy, we all know that. But invariably, they are used to quite different flavor than the insidious serpent, usually to more straightforward scary effect. Snakes Are Sexy on occasion, but bugs? Pretty much never. And because things with too many legs, too many eyes, and a myriad of alien body parts often involved in the uglier sides of nature repulse us so much, it only seems natural that they become the symbols of monsters.

This trope specifically describes insects (and spiders) as motif, but never the direct threat. In horror fiction, quite often the true villain's lurking evil is heralded by the appearances of unwelcome many-legged things, less often of unusual size than unusual number. Perhaps they'll come out of holes in the walls or begin populating attics or basements. Maybe you can trace the villain's nest to the greatest concentration of them. Maybe they're not even really there, and only the monster's chosen victim can see them.

There is a lot of overlap with several tropes on the Scary Animals Index:

The key to this trope is the inherent threat while lacking in overt or immediate violence. Bees and wasps are rarely used due to their tendency towards swarming a threat plus their association with stinging—and a large number of deaths in real life linked to such. Conversely, you rarely see ants because, while they swarm in much the same way as bees, you're very unlikely to get more than a couple days' burning itch from a bad encounter with one. In real life, these things are easily ignored even if they are present, and so they don't make good heralds of evil. Note that every trope listed as crossing over with this one involves a critter that is known more for the negative feelings it induces more than a direct threat posed by the animal itself.

That's not to say you can't have such bugs used for this trope, it's just harder to work with them. On the topic of notable exceptions, perhaps the most common iteration of this trope in Japan is Butterfly of Death and Rebirth due to the symbolism described on that page. While it's a far-reaching trope, you're far more likely to find it used for horror—ranging from vaguely sinister to gory—in Eastern and Eastern-influenced works.

This may be explicitly justified in-universe when the villain the bugs herald is a Pest Controller or a Monster Progenitor, and thus explicitly called or created the swarms there to begin with.

Don't confuse it with a certain cartoon rabbit heralding evil.