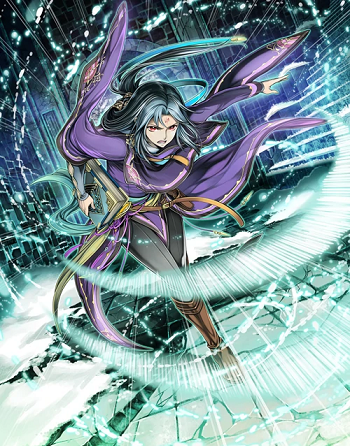 An attack commonly used in anime and video games. The user is able to use air itself to slice enemies, focusing a current of wind, or in some cases sound, to the point where it takes on a sharp edge, which the caster launches at foes.

If it requires swinging around a bladed weapon to perform, this is also a Sword Beam.

Sometimes the user has other wind-based powers along with the razor wind, but it can also be used by sword-wielders who are skilled enough they can make a sword's cutting power extend beyond the blade itself in a shockwave. This form is basically a way to give someone with a BFS a ranged attack. It's also handy if they're not allowed by the censors to actually strike people and bleed them, or just cheaper to animate.

Named after the move from the Pokémon video games, ironically termed a Normal-type attack, not Flying.

This is Older Than Steam, partly thanks to Shakespeare. Before him, Japanese folklore tells of the wind yōkai called kamaitachi, weasels with razor sharp claws that attacked in groups to knock people down and leave bloodless cuts on their legs — all while moving with such blinding speed that the victim never saw his attacker. This was originally just a pun on "kamaetachi," which meant roughly "attacking sword", bringing the trope full circle.

Another commonly seen term in English is kazekiri, a rough translation of "wind cutting".

Sometimes related to Make Me Wanna Shout. Tornado Move is a similar technique.