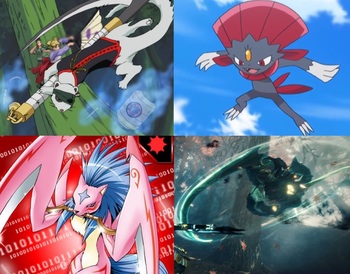 I Am Weasel MOTHUF#CKA!note Clockwise: Kamatari from Naruto, Weavile from Pokémon, Kamaitachi from Nioh 2 and Kyukimon from Digimon
"You are walking outside and suddenly discover that your leg has been cut as if with a sharp blade. This is said to be the work of a kamaitachi— literally a "sickle weasel.""
— The Book of Yokai: Mysterious Creatures of Japanese Folklore

Kamaitachi - known to English speakers as the "Scythe Weasel" or "Sickle Weasel" - is a type of Youkai that can be found in various regions in Japan, most commonly in the mountains of Koushin'etsu.

Kamaitachi reported to operate in trios that follow a Thief, Fighter, Mage setup: the first one knocks down a traveler with a gust of wind, the second cuts the traveler with its sickle-like claws, and the third applies an ointment that stops the bleeding, leaving the victim with bloodless but inexplicably large and painful wounds. The reasons for this depend on the region, as while some believe that the scars they create on their victims are a part of a competition between them, others believe that they subsist on blood and feed from the cuts they make.

They're essentially the personification of the pain felt during a bitterly cold wind, and are Japanese culture's answer to a scientific phenomenon where shallow cuts appear on the legs of travelers in mountainous regions, believed to be caused by small debris carried by stray air currents. The British Medical Journal Spontaneous Wound Report even calls it "kamaitachi disease" after the beast of legend.

In pop culture, their appearance can often differ, often ranging from the size of your average weasel to bigger than a horse, their behavior often predatory. Their iconic blades are either a part of their bodies or they could even carry around real-steel farming tools that evoke the image. Being Youkai, they are seen as magical beings with a strong affinity towards wind and ice magic.

Gaijin Goomba (both the real person and his cartoon goomba counterpart) explain to the viewers just what the Kamaitachi is.

Gaijin Goomba (both the real person and his cartoon goomba counterpart) explain to the viewers just what the Kamaitachi is.