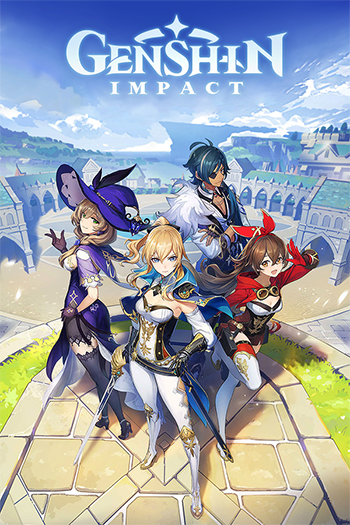 Step Into a Vast Magical World of Adventure
Left to right: Lisa, Jean, Kaeya, Amber
You and your sibling arrived here from another world. Separated by an unknown god, stripped of your powers, and cast into a deep slumber, you now awake to a world very different from when you first arrived.
—Google Play Store
Advertisement:

Genshin Impact (原神, Yuánshén) is a fantasy Free-to-Play open world action RPG developed and published by miHoYo for PC, console and mobile. It released for PC, iOS, Android, and PlayStation 4 on September 28, 2020 and for PlayStation 5 on April 28, 2021 in multiple languages and regions, with a Nintendo Switch port planned for a later date. The game is available in Chinese, Japanese, Korean, English, Spanish, German, French, Portuguese, and Russian, and it continues the tradition miHoYo set in Honkai Impact 3rd of localizing into South East Asian languages: Tieng Viet, Thai and Bahasa Indonesia. It also has full English and Korean voiceovers, on top of the usual Chinese and Japanese ones.

The world of Teyvat is that of seven elements, each ruled over by one of the god-like "Archons" collectively known as The Seven. When an ordinary person meets great peril and frustration at the limitations of their mortality, there is a chance the gods grant them their favor in the form of a "Vision": an elemental focus which grants that person the power of magic, and potentially the means to ascend to divinity themselves.

You play as the "Traveler", one of two dimension-hopping siblings who traveled to Teyvat on a whim, only to find yourselves in the middle of a world-shaking cataclysm. When you tried to leave, an unknown god stripped you of your powers and spirited away your sibling, then dumped you back onto Teyvat. An unknown number of years later, you awaken from a deep slumber to find a world at peace, your sibling nowhere in sight. Now you must travel the length of Teyvat to regain your elemental powers, track down The Seven and discern the identity of the Unknown God, and reunite with your lost family.

As an open-world game, the game puts a big emphasis on exploring. You can sprint, swim, climb, and glide virtually anywhere, to wherever you wish. You can play up to 4 characters in a party, with the Tag Team system akin to miHoYo's earlier game, Honkai Impact 3rd. The progression systems follow the traditional RPG methods of leveling up characters, weapons, and equipment (called Artifacts). Each playable character comes with a specific element and a preferred weapon type. With the characters' different elements and abilities, the game expects players to exploit them both in exploration and combat, particularly by switching the party members to take advantage of the seven elements and their resulting combinations. There is also the gacha mechanic called Wish, from which you can get new and potentially rare weapons and characters by spending a rare currency called either "Acquaint Fate" or "Intertwined Fate" (which can be acquired slowly or bought by Primogems, another rare currency that can be either acquired or bought by real money).

There is also a supplementary webcomic/manga that serves to give added backstory and side stories to the main game. It is available on the official website

An anime adaptation by ufotable has been announced on the 16th of September 2022.

Step Into the Magical World of This Game's Tropes: