Video Game / Ghost of a Tale 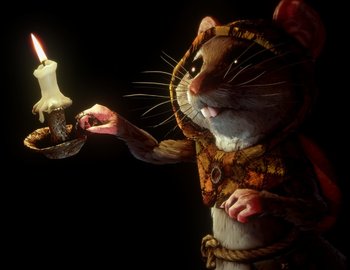 A massive adventure for this tiny mouse.
Advertisement:

Ghost of a Tale is a 3D stealth Action-Adventure game where you play as Tilo, a mouse minstrel who has been imprisoned by the Rats of the Red Paw Army and sent to Keep on a remote Island in the middle of a lake called Dwindling Heights. It was developed by, and initially released on Steam Early Access in July 2016, before getting ported to Xbox One on June 30th, 2017, fully launching on PC on March 13th, 2018, and getting released on PS4 on March 12th, 2019.

The Keep where you have been sent to is rugged and has seen better days as well as most of the guards around. Together with the help of some questionable characters, you will need to find your way out of this place and find and save your wife who also has been taken prisoner.

Gameplay revolves around getting around undetected and escaping out of sight and hide from any guards that do see you. Being a minstrel and small compared to the rats means you don't have the power to fight off the guards, but you can easily hide inside baskets, chests, small closets and many other places. These are also the only places you can save at.

Ghost of a Tale provides examples of: