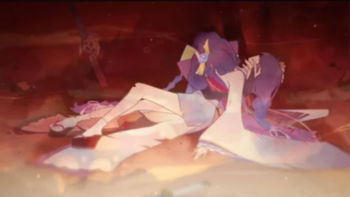 "I'm fearful because of what I witnessed five hundred years ago — her demise and that thing. But, if... If it were you, everyone would be safe. You would've saved the world."
Advertisement:

Despite the game being touted as a Breath of the Wild clone at first glance, just like its sister game, Genshin Impact is no stranger with moments that pulls on your heartstrings. If you are veteran miHoYo fans since both Guns GirlZ and Honkai Impact 3rd, expect something like this happens. If this is your first miHoYo game, you better prepare some tissues and get used with their writing style.