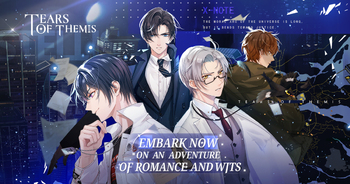 A Visual Novel otome game by Chinese game developer miHoYo of Genshin Impact and Honkai Impact 3rd fame. It was initially released in Chinese only in 2020, but has since been greenlit for an international release. The game has officially launched on July 29, 2021. Its original name is 未定事件簿 (wèidìng shìjiàn bù/mitei jiken-bo, lit. 'Undecided case files' - the same name for X-Note in-game).

Taking place in the city of Stellis, you are a junior attorney-at-law at the Themis Law Firm. After your first few cases, your skill in the courtroom eventually leads you to join an investigative unit known as NXX.

The game combines mystery visual novel with point-and-click adventure and RPG elements. Each chapter, you'll gather evidence to defend your client, whether it's through investigation, questioning witnesses, or making connections with important details and testimonies. Sometimes, you'll need to refute arguments in Debates, utilizing cards obtained through Visions to make your statements. At the end of each episode is a Trial, where you'll need to present your evidence to defend your client in the courtroom.

Compare and contrast with Mr. Love: Queen's Choice, another Otome Game from a Chinese company featuring a brown-haired protagonist and four main love interests solving a mystery. Also see Ace Attorney and Tsumugu Logic for the problem-solving, law aspect of the game.