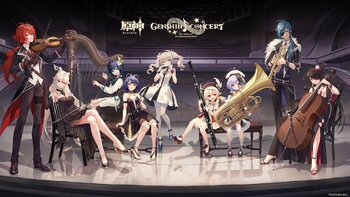 In stark contrast to Honkai Impact 3rd's heavy techno and rock style of music, miHoYo went for a full-on orchestral approach to Genshin Impact's soundtrack, recorded and performed by the Shanghai Symphony Orchestra, the London Philharmonic Orchestra, the Tokyo Philharmonic Orchestra (the latter of which joined in for the composition of Inazuma's music) and the London Symphony Orchestra (joining in for Sumeru's music).

Despite the ongoing COVID-19 Pandemic, lead composer Yu-Peng Chen made a Herculean effort into coordinating the HoYo-Mix team and the various orchestras in order to deliver one of the best soundtracks for a free-to-play game.

The Wind and the Star Traveler

City of Winds and Idylls

Jade Moon Upon a Sea of Clouds

Islands of the Lost and Forgotten

Forest of Jnana and Vidya

Ever wanted to fully listen to the music in the character trailers? Well, now

, and they’re as amazing as you’d expect.

"Footprints of the Traveler'' albums