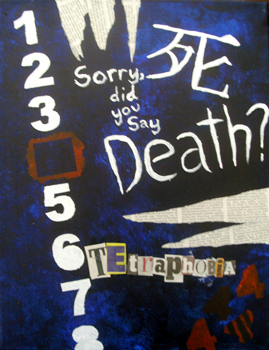 "There's four slices [of cake]! THEY MIGHT AS WELL HAVE TOLD US TO DIE!"
— Guido Mista, JoJo's Bizarre Adventure: Golden Wind
Advertisement:

In most Chinese languages and languages that borrow words from it, the words for "four" (四) and "death" (死) are written differently but pronounced similarly (somewhat like "sì" in Mandarin, "sei" in Cantonese, "shi" in Sino-Japanese, "tư" in Sino-Vietnamese, and "sa" in Sino-Korean). As a cultural trope, East Asian works of media tend to treat the number in much the way Western writers treat the number 13 (a number that Arabian and European cultures consider Magical, and usually in a bad way).

As a similar point of reference, building floors and apartments are (mis)numbered accordingly to omit the fourth floornote The US does the same with the number 13. Floors will go straight from 12 to 14, while the UK skips Rm13. or replace the numeral with an alternative sign, such as the letter F or 3A. Cardinal numbers in Japanese are customarily read using the on'yomi (Sino-Japanese) pronunciation, aside from 4 and 7, which are read using the kun'yomi (native Japanese) readings of "yon" and "nana" instead of the on'yomi "shi" and "shichi", respectively.note Of course, it also handily prevents them from being confused with each other when read aloud. Apparently the Japanese word form "shi ni" (four twos), which translates to 'death', gives the number eight a related association.

On an unrelated note, Christianity also has several examples of Four Is Death, with the Four Horsemen of the Apocalypse (the fourth of which is Death) and the Four Last Things (Death, Judgment, Hell, and Glory).

Compare Mystical 108, 13 Is Unlucky and the Number of the Beast.

Note: This is not a repository for every time the number 4 just happens to appear in a work (or for series where the fourth installment was particularly bad), nor for when bad things coincidentally happen in the fourth episode or installment; this is for when the trope is consciously addressed by having the number 4 intentionally and unambiguously associated with death or misfortune. Particular examples of common groups of four that are normally unrelated to this trope are the Elite Four, The Four Gods, the Four-Element Ensemble, and the Four-Temperament Ensemble. In particular, most groups of four mini-bosses in Eastern RPGs refer to one of those or to the shitennō — often localized into the Elite Four or the Four Heavenly Kings — and have no relation to this trope.