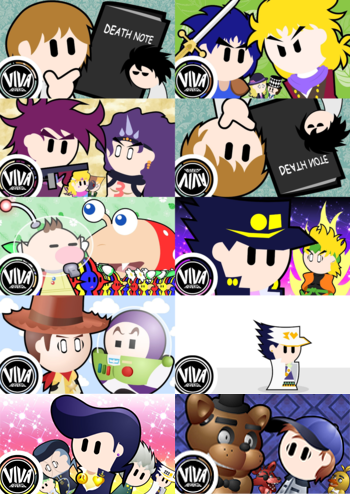 Taking you up to speed with your favourite media.
This is a series of YouTube videos released by Viva Reverie, aka IMMATOONLINK

. Each video name includes the name of the source material followed by the phrase "But Really Really Fast" which is also the name of the author-created playlist for these videos

Each video is characterized by Motor Mouthed characters drawn in extremely simple styles with little more than a torso and head with solid black eyes. Their bodies vibrate rapidly to indicate speech, and Floating Limbs appear when gestures are needed and disappear as soon as they've accomplished their purpose. Which is to say, you're not here for top-notch visuals, you're here for the Rapid-Fire Comedy.

The videos in this series are:

Given that this series is based on summarizing existing works, expect Spoilers Off for those works. Also, no need to cover tropes that originate from those works.

Look out, it's Tropes Guy!

I have defeated Tropes Guy!