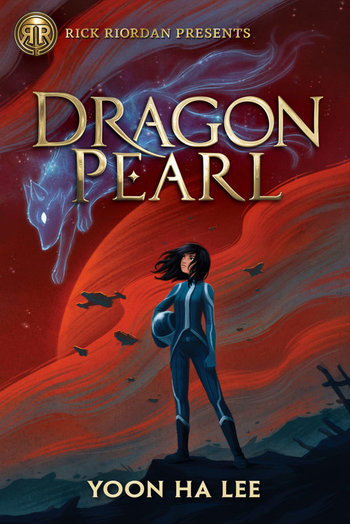 Dragon Pearl is a book by author Yoon Ha Lee published under the Rick Riordan Presents label; it's similar to Riordan's books, but IN SPACE! and with Korean Mythology.

Thirteen-year-old Min is a gumiho, a fox spirit, who lives on the planet of Jinju with her mother and her many aunts. Jinju is imperfectly terraformed; it's capable of supporting life to some extent, but the air is unsafe to breathe and crops can't grow outside special environmental domes. Min is the second oldest of her generation. Her older brother Jun joined the Space Force, wanting to see the Thousand Worlds, and she wants to follow him when she's old enough. One day an investigator arrives - Jun has vanished. He's suspected of deserting to track down the legendary Dragon Pearl, which was meant to be used to fully terraform Jinju until it went missing. After a scuffle with the investigator, Min sets off on her own quest to find out what happened to her brother.