Literature / Aru Shah and the End of Time 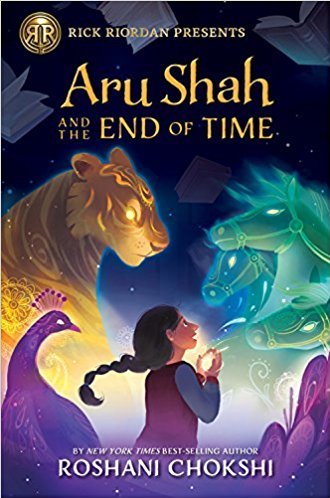 She's not a liar. She just has a big imagination.
Aru Shah and the End of Time is a book by Roshani Chokshi published under the Rick Riordan Presents label, featuring Hindu Mythology.
Advertisement:

The story goes a little like this: Aru Shah is known for lying at school. After Aru screws up one of her lies, a group of students come to her house to catch her fibbing. As a result Aru lights a magical lamp containing a demon, in an attempt to prove it's cursed. Having freed the demon and being the only one not frozen by it, Aru must now go on a magical journey to save all of time. Joining her are her soul-sister Mini and their Deadpan Snarker pigeon mentor Boo. There's just one small problem: none of them actually know what they're doing.