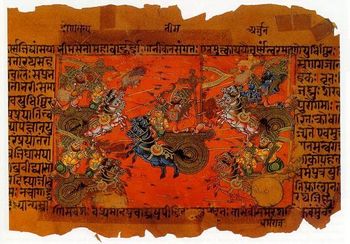 "Whatever is here is found elsewhere. Whatever is not here, is nowhere else."
— The Book of the Beginning
Advertisement:

The Mahabharata is a great Indian epic, part of Hindu Mythology and a Narrative Poem primarily about the Civil War between two factions, the Kauravas and the Pandavas of the Kuru dynasty who are Royal Cousins. It is popularly said to be written by the sage and Author Avatar "Ved-Vyasa" (meaning the Arranger of the Vedas).

Though based on earlier oral stories, recording did not begin until around 400 BCE, according to the most widely accepted theories about its composition.

The Epic starts with King Shantanu, the ancestor of the Kurus, falling in Love at First Sight with (unknown to him) River Goddess Ganga, whose condition for marrying him is that he should refrain from questioning her about anything that she does. Ganga, however, appears to be a Jerkass, and drowns every single child that she bears as soon as they are born. Shantanu finally asks her to stop, only to find out that her sons are holy souls that, who, due to a crime of vandalism that they had committed, were forced to be born as mortal humans, and that by drowning them, she's letting them go back to the place where souls go after having transcended the cycle of rebirth. Ganga leaves and her son, Devavrata, becomes the apparent heir. Shantanu finds his Second Love, a young fisherwoman named Satyavati whom he cannot marry due to Parental Marriage Veto. The Wise Prince Devavrata promises to step away from the throne and to remain celibate for the rest of his life so that Satyavati's children can inherit the throne. Satyavati is allowed to marry Shantanu. Devavrata is hence called Bhishma or the 'one with a terrible vow'.

Later on, he abducts three princesses from the kingdom of Kasi during a Svayamvara (a marriage ceremony where the princess gets to choose her husband), for his half-brother (the son of Satyavati and Shantanu) Vichitravirya to marry. Two of the princesses agree to wed his half brother. Amba, the eldest, refuses, but her lover, Salva, the king of Saubha, refuses to take her back. She is unable to persuade Bhishma to wed her (and thus gain the respect that comes with marriage) and she takes up austerity, vowing to take her revenge on Bhishma, which she eventually does.

Vichitravirya dies without an heir to the throne, and as Bhishma is unwilling to procreate, Satyavati calls on the sage Ved-Vyasa to impregnate the two widowed queens. Ved-Vyasa is the illegitimate offspring of Satyavati and Parashara, a wandering sage, before her marriage to Shantanu, who was brought up by his father. Two children result, which are deemed to be the sons of Vichitravirya. Blind Prince Dhritarashtra is the older, but due to his blindness, the right to be an emperor is passed down to the second son, Prince Pandu. Dhritarashtra marries the queen of Gandhara, Gandhari, who brings along her brother, Chess Master Shakuni. Pandu, the second son, is sickly. He marries Princess Kunti and a second woman named Madri. Vyasa's visit also results in a son being born to a servant in the palace called Vidura. He is wise, but since his mother is not a princess, he cannot rise beyond the rank of Prime Minister.

Pandu is cursed by a sage to die childless. As a result, he exiles himself to the forest and Dhritarashtra remains king. Pandu eventually begets five sons by magical means— his wife Kunti has the power to call any God to father her children. Pandu then dies and his sons return to the kingdom. The children of Dhritarashtra are called Kauravas and the children of Pandu are called Pandavas. A rivalry quickly develops and Duryodhana, the oldest of the Kauravas, resolves to eliminate his cousins. When Duryodhana attempts to wipe out the Pandavas by tricking them into living in a palace made of lac and then burning it down, they escape and resolve to hide their identity till they are in safe territory. On the way, they marry Draupadi, the Princess of Panchala. Meanwhile, King Dhritarastra learns of the plot to kill the Pandavas and, obviously displeased with the infighting, gifts them with half the kingdom. This does not please the Kauravas, and only adds to their dislike of the Pandavas. Duryodana and his uncle, Shakuni, challenge the Pandavas to play a dice game where the Pandavas stake and lose their kingdom, wealth, themselves, and even temporarily their wife Draupadi (who is married to all five of the brothers). After being humiliated, they are exiled for thirteen years. King Dhritarashtra promises to give back their kingdom if they are not caught by the end of the exile. His sons, however, are desperate to prevent this. Peace is exhausted and a war ensues.

The Pandavas are five brothers, plus Draupadi, their wife, and Krishna, the eighth incarnation of Vishnu.

The Leader/Big Brother Mentor — Yuddhisthira. The hero with many flaws, who nevertheless emerges as The Heart as he realizes the futility of war.
The Big Guy — Bhima. A brutal, violent fighter who is blessed with superhuman strength. He is able to withstand any enemy and fight without surrendering.
The Lancer/Archer Archetype — Arjuna. Filled with doubts regarding the justness of war, he seeks guidance from Krishna in the most famous section of the Mahabharata, the Bhagavad Gita.
Tagalong Kids — Nakula and Sahadeva.
The Smart Guy: Krishna. Also the Man Behind the Man and the Xanatos Speed Chess Master of this entire epic.
The Chick - Draupadi. Instead of a peacemaker however, she brings them closer to war. Closer in personality to The Dark Chick.
The Dark Chick — Shikhandi, formerly Amba, the eldest princess of Kasi, in his previous life. Once Bhishma rejected her, Amba became reborn as Shikhandi to exact revenge for her humiliation.

The Kauravas consist of the numerous sons of Dhritarashtra and their allies. These are the main ones:

The Big Bad — Duryodhana. The leader of the Kauravas, he refuses to return the Pandavas' rightfully owned land after their exile, and ultimately serves as the catalyst for war.
The Dragon — Karna. Technically the real Big Brother Mentor of the Pandavas. He is Kunti's firstborn son (but was abandoned due to his being born out of wedlock), but even after he finds out, he sticks with the Kauravas out of loyalty. The Pandavas find out only after he dies at their hands.
Evil Genius/Evil Uncle — Shakuni. He is the one who persuades Yuddhishtira to continue the dice game, and later persuades Duryodhana to go to war with the Pandavas.
The Brute — Dushasana. He attempts to humiliate Draupadi in front of the court, and remains one of the most brutal fighters in the war.

Subject to countless Alternative Character Interpretation, mostly because of most characters being Jerkass or worse, or some characters being Screwed by Destiny. Countless adaptations have taken place; this epic is often compared to the works of Homer.

Received a 94 episode television adaptation on India’s state run Doordarshan channel from 1988 to 1990. This show remains the Indian TV show with the highest ever viewership. All episodes are available on YouTube with English subtitles.

It also received another adaptation, one year later after the Indian series, in the format of a six-hour long miniseries by British filmmaker Peter Brook. It is notable for its multi-ethnical cast, consisting of not only Indian actors, but also African, Caucasian, Middle Eastern and East Asian actors.