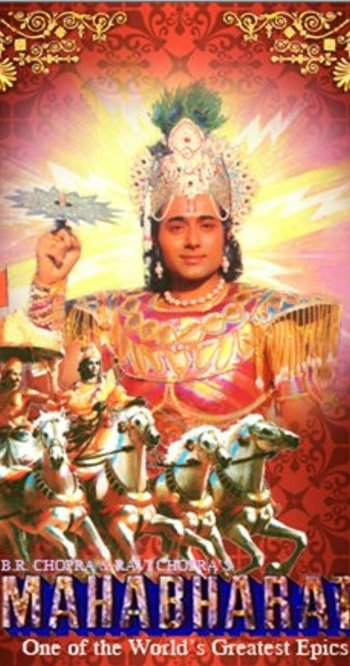 "I am Time! And only I can recite this epic tale stretching across many generations, because only I have existed throughout the past, present and future."
—The personification of Time

The ancient Indian epic poem received a Hindi language television adaptation on India’s Doordarshan channel. Produced by longtime Bollywood movie producers Baldev Rai Chopra and his son Ravi, this show was a Long Runner with 94 episodes. It premiered on Sunday morning Oct 3 1988 and all 94 episodes were aired continuously with no season breaks or reruns, until the Series Finale aired on July 14th 1990. To this day, the show remains the most watched TV show in India, with apocryphal stories of normally busy streets being near empty while this show was on.

Tropes specific to this TV adaptation are