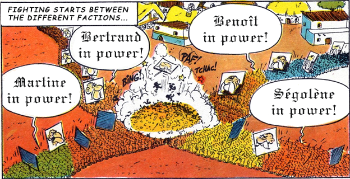 "All wars are Civil Wars, because all men are brothers."
— Francois Fenelon
Advertisement:

A Civil War is an intense conflict between organized groups trying to take control of a state and/or region, or to change government policies. Most Civil Wars are fought by a status-quo ruling body of the state and one or more groups that wish to change said state, though said non-state groups often fight each other as well, and it can also be between two states that both claim to be the sole rightful (nation-)state for a single nation. To be considered a "war" rather than an uprising or rebellion requires that the conflict involve regular armed force, involve organized factions, and be on a certain scale and of a certain intensity. All the sides involved have to have a genuine chance (however small) of achieving their aims in the conflict for it to be a Civil War and not just a rebellion/uprising. Where rebellions end and Civil Wars begin often isn't clear, and whether a conflict is called one or the other often depends on what the factions - especially the victorious one - decide to call it.

Those fighting Civil Wars usually don't call them that, as they try to make use of the power of language to suggest that they are in the right: the ruling power will term it a police action against unpopular extremist rebels. Their enemies will consider themselves People's Heroes and Freedom Fighters spearheading a populist Revolution. However, it is just as likely for a small group of rebels to claim Civil War status (as such terminology would give their struggle an air of seriousness it would not otherwise have), or likewise, for the government to use the term (to justify force that would seem excessive against a mere criminal action). How the outside world views the situation is largely Written by the Winners. This is largely why wars for independence are so murky when it concerns the concept: generally, if a country fails to gain independence, expect it to be called a civil war, and if it does, expect it to be called a regular war or a Revolution (thereby implying that the two post-war countries were never one).

No matter who prevails, it is often a Pyrrhic Victory, as, depending on the world situation, internal conflict provides an opportunity for exploitation or conquest by outside forces: Divide and Conquer if the villain takes advantage, and Enemy Civil War for the heroes. Indeed, many (real and fictional) civil wars are also Proxy Wars.

Civil Wars both real and fictional have provided excellent opportunities for stories, as depicted morality can be all over the board. The fact that both sides believe themselves to be justified allows for an authorial portrayal of both sides having good people fighting for what they believe in along with a couple of real bastards on both sides. Often, while one side may indeed be presented as morally superior, there will be a Worthy Opponent among the enemy ranks and the Perspective Flip is common. Along with that, there can be Star-Crossed Lovers pining for each other across the battlefield and families split by the tension of what they believe is right.

This is not to be confused with Marvel Comics' Civil War, or Civil War the Power Metal band.