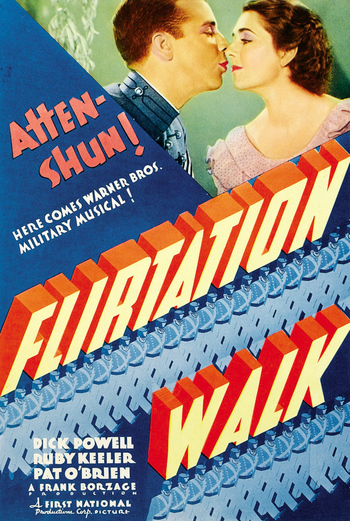 Flirtation Walk is a 1934 romantic musical film directed by Frank Borzage, with a screenplay written by Delmer Daves.

It starts out with one of the all-time Life Imitates Art moments in film: a naval and air attack on Pearl Harbor, Hawaii. But it's just a drill! (Remember, 1934. They probably should have practiced more.) Richard Dorsey (Dick Powell) is a private in the Army stationed on Oahu, with a contentious but generally friendly relationship with his sergeant, "Scrapper" (Pat O'Brien). The routine of Army life in Hawaii is disturbed by the arrival of General Fitts and, more importantly, his lovely daughter Kit (Ruby Keeler). Gen. Fitts seems to think his daughter a match for a junior officer, Lt. Biddle, but she is drawn to Pvt. Dorsey.

Dick gets assigned to be Kit's driver. Instead of going to the Army ball she's supposed to attend, Kit prevails on Dick to take her on a moonlit drive around Oahu, which involves a luau, which then involves Dick and Kit cuddling on the beach, which then ends with the two of them being caught by Fitts and Biddle. Dick narrowly avoids a court-martial, but when Lt. Biddle sneers that "an officer and a gentleman" would not have gotten caught in such a position, Dick is affronted. He decides to apply to West Point and become an officer. Dick is accepted at West Point and does very well there—until Gen. Fitts arrives at West Point to be commandant, with Biddle and Kit in tow.