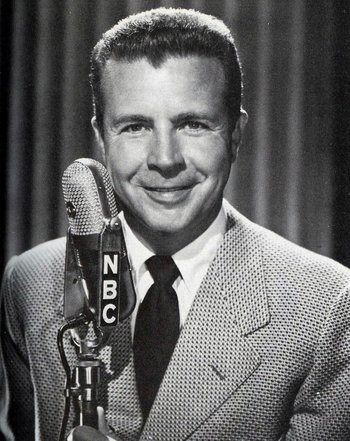 Richard Ewing "Dick" Powell (November 14, 1904 — January 2, 1963) was an American singer, actor, film producer, and film director. He started off as a singer and dancer who starred in many comedies and musicals, including several Busby Berkeley films. With Murder My Sweet in 1944 he would transition into a hardboiled, rugged "tough guy" leading man in projects of more dramatic nature. Murder My Sweet was also the first time anyone played private detective Philip Marlowe on screen. He also found success with the radio series Richard Diamond Private Detective, which ran from 1949-1953.

Later in his career, he took an interest in directing and formed his own television production company with the help of David Niven, Charles Boyer, Joel McCrea and Ida Lupino. It was named Four Star Television and made the most successful television shows in 1950s' America, such as The Big Valley and Burke's Law, launching careers for Steve McQueen, Mary Tyler Moore, Gene Roddenberry and Aaron Spelling. Unfortunately, the greatness wasn't meant to last when Powell died from stomach cancer in 1963.

He was married to June Allyson and they had two children.