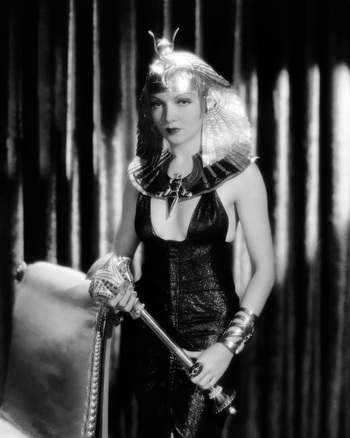 Your Majesty!
Cleopatra is a 1934 film directed by Cecil B. DeMille, starring Claudette Colbert.
Advertisement:

It is about—no prizes for guessing correctly—Cleopatra VII, Queen of Egypt. The film opens in 48 BC, with Cleopatra struggling with her brother Ptolemy XIII for control of the country. Cleopatra has been dumped in the desert by Pothinos, a minister loyal to Ptolemy, but she makes her way back to Alexandria to meet Julius Caesar (Warren William). Using her feminine wiles, she seduces Caesar and gets him to back her claim to the throne of Egypt.

Later, after Caesar's Senate colleagues get all stabby, she again uses her feminine charms on Caesar's lieutenant, Mark Antony (Henry Wilcoxon). But there's the small matter of Caesar's nephew and heir, Octavian, who also desires to rule the Roman state.

One of many film representations of the life of Cleopatra, with the 1963 Elizabeth Taylor film being the most famous. Made at the tail end of The Pre-Code Era and thus chock full of half-naked women. De Mille watched the silent Cleopatra film with Theda Bara as preparation for this movie, and thus was probably the last person to see it, as the negative of the Bara film was destroyed in a 1937 fire.