Film / Flying Down to Rio 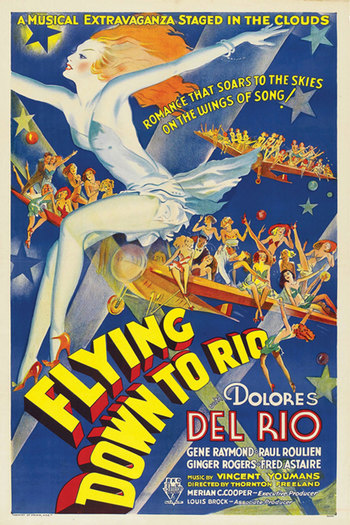 "My Rio, Rio by the Sea-o,
Flying down to Rio where there's rhythm and rhyme.
Hey feller, twirl that old propeller,
Got to get to Rio and we've got to make time."
Advertisement:

A Musical Romantic Comedy from 1933, starring Dolores del Río and Gene Raymond but nowadays remembered more for the appearances of a young Fred Astaire and Ginger Rogers. In fact, it's the first time they were on-screen together, which is really the movie's main claim to fame (even though they only share one dance number together). The musical directer was Max Steiner.

The real focus of the movie is on the conductor of Fred's (Astaire) band, Roger (Raymond), and rich Brazilian ingénue, Belinha (del Río). He adores her to the point where he gets fired for dancing with her, and she eventually warms up to him, but there's one problem; she's already engaged to Julio (Raul Roulien), her fiancée back home (who happens to be Roger's friend). There's another problem; the hotel the band is playing at (which happens to be owned by Belinha's father) doesn't actually have an entertainment license, which means the big opening could be a big flop. Looks like Roger's going to have to think of something big to make sure his band is a success.