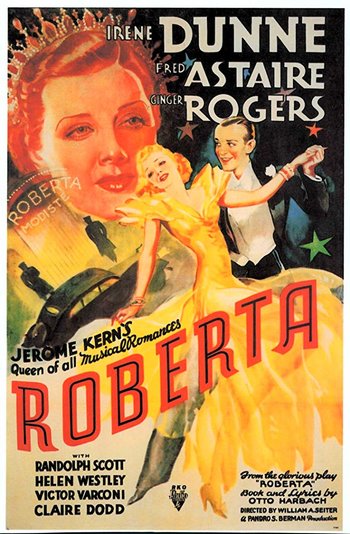 "When your heart's on fire,
You must realize, smoke gets in your eyes..."
— The frequently Covered Up song, "Smoke Gets in Your Eyes"
Advertisement:

Roberta is a 1935 RKO musical film starring Irene Dunne, Randolph Scott, Fred Astaire, and Ginger Rogers. The film features music by Jerome Kern and lyrics and book by Otto Harbach, based on their 1933 stage play, which was in turn based on the novel Gowns by Roberta by Alice Duer Miller.

Set in Paris, John Kent (Scott) is travelling with his friend Huck Haines (Astaire) and the latter's dance band, the Wabash Indianians. The person who booked the band, Voyda, refuses to let them play after he discovers that the band are not actual Indians, merely from the state.

John gets help from the only person he knows in Paris—his Aunt Minnie, who owns the gown shop "Roberta." John meets her chief assistant, Stephanie (Dunne), and quickly falls in love with her.

Huck also meets somebody he knows. The "Countess Scharwenka" turns out to be his old sweetheart, Lizzie Gatz (Rogers), and she gets his band a gig at the nightclub where she works.

Two things trouble John. One is Ladislaw, a handsome Russian who seems to be infatuated with Stephanie, and the other is Sophie, a conceited ex-girlfriend he left behind over an argument about his lack of sophistication.

The film was remade in 1952 and titled Lovely To Look At.