Western Animation / My Life as a Zucchini 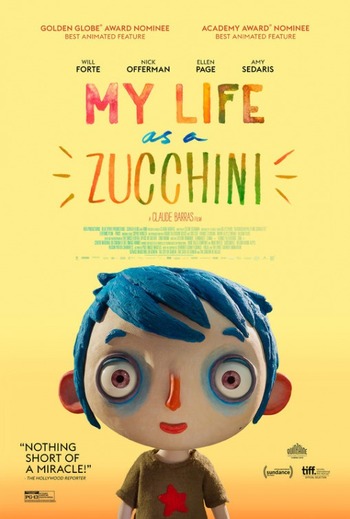 My Life as a Zucchini, originally titled My Life as a Courgette (Ma vie de Courgette) is a 2016 Stop Motion animated movie directed by Claude Barras and written by Céline Sciamma. The film is an adaptation of the 2002 novel Autobiographie d'une Courgette.
Advertisement:

After the accidental death of his alcoholic mother, Icare, who prefers the name "Zucchini", which was his mother's nickname for him, is sent to live in an orphanage with other children his age. Zucchini initially struggles to cope in his new environment. However, with the aid of kind police officer Raymond, and his new friends at the orphanage, Zucchini begins to learn the meaning of trust and true love.

Alternative Title(s): My Life As A Courgette