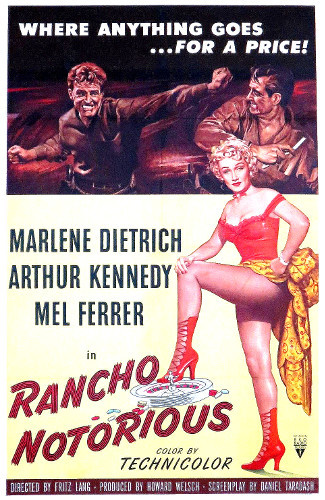 Rancho Notorious is a 1952 Western film shot in Technicolor, directed by Fritz Lang and starring Marlene Dietrich as the matron of a criminal hideout called Chuck-a-Luck. Arthur Kennedy and Mel Ferrer play rivals for her attention in this tale of frontier revenge.

Vern Haskell (Kennedy), a nice ranch hand, seeks out to avenge his fiancé's death when she is raped and killed during a robbery. His revenge leads him to Chuck-a-Luck, Altar Keane's (Deietrich) ranch set up to hide criminals, and he finds more than he bargains for.