Film / Demetrius and the Gladiators 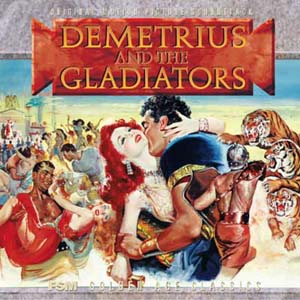 Caligula: Do you see her, Claudius? The Goddess Diana. Every night she comes to me... to my arms. There... there she goes. Now do you see her?
Claudius: No, sire.
Caligula: Why not?!
Claudius: Only you gods are privileged to see each other.
Caligula: ... Of course.
Advertisement:

Demetrius and the Gladiators is a 1954 Sword and Sandal film and sequel to The Robe. Made by 20th Century Fox, the film was directed by Delmer Daves and produced by Frank Ross, and starred Victor Mature, Susan Hayward, and Jay Robinson, who as Caligula is so far over the top, he could have landed on the moon 15 years before Neil Armstrong. The score by Franz Waxman re-cycled Alfred Newman's themes from the earlier film.

The film follows a Christian slave Demetrius (Mature), who, instead of being executed, is made to become a gladiator by the Roman emperor Caligula (Robinson), in which capacity he captures the roving eye of the wicked Messalina (Hayward), priestess of Isis and wife of Claudius. The story follows Demetrius' battles and victories, all in his attempts simply to survive the battles in which he is forced to compete.