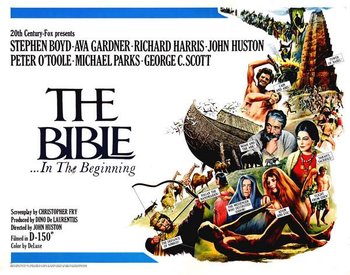 The Bible (in some places The Bible: In the Beginning...) is a 1966 Biblical Epic directed by John Huston, produced by Dino de Laurentiis and with an All-Star Cast and thousands of extras. One of the last of the great Biblical Epics, it retells the most famous episodes from the Book of Genesis, divided into a number of episodes or chapters.

It was filmed in Dimension-150, one of only two films (the other was Patton) to do so. The score, by Toshiro Mayuzumi and an uncredited Ennio Morricone, was nominated for an Academy Award, but lost to Born Free.