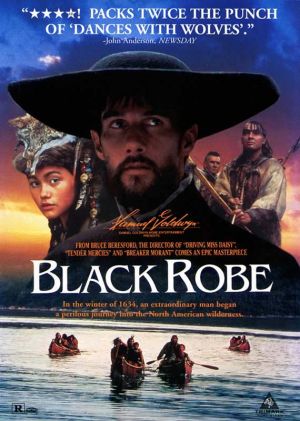 Jesuit missionary Father LaForgue is anxious to evangelize the indigenous peoples of 17th century interior Canada. He sets out from Quebec with the guidance of Chomina, an experienced Algonquin traveler, Chomina's family, several other natives and the non-Jesuit carpenter, Daniel. LaForgue struggles with his deeply-held religious convictions as he encounters a vast, alien landscape, meets various hostile natives and confronts cultural attitudes he fails to understand.

Black Robe is a 1985 novel by Brian Moore. Moore also wrote the screenplay for the 1991 film of the same name.

This article mainly deals with the film.