Working Through the Cold 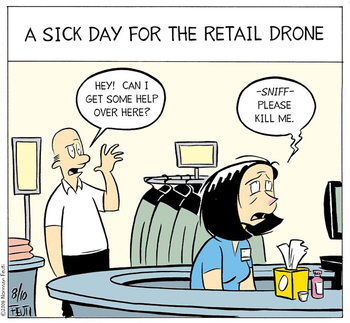 "Can you believe this? [Doofenshmirtz] had the nerve to call in sick. I'm here. Carl's here. Don't you think I'd rather be at home watching Ducky Momo?"
— Major Monogram, Phineas and Ferb
Advertisement:

The Hero may be feeling under the weather, but the world isn't going to stop just so she can take a rest. She's going to have to haul herself up and get to work, either because she's simply that dedicated or because the latest situation is something only she can handle, healthy or not. Other characters may try to keep her in bed, but it's all in vain.

Naturally, this tends to put the hero at a handicap. If the mission involves stealth, she may find herself in need of an Anti-Sneeze Finger. Malfunction Malady could be invoked if the hero has powers or magic. If her biggest concern is other characters coaxing her back to bed, she might try Feigning Healthiness.

Alternatively, a character may try to get themselves sick, only to have to go to work anyway.

Truth in Television for some Workaholic types or if the boss says it's absolutely necessary to come to work that day. However, it's normally discouraged as the potential to infect other workers and lowered performance can make the sick employee more of a liability.

Compare I Can Still Fight!, for the Serious Injuries version and Pulled from Your Day Off for times character(s) have to come in to work despite being on break rather than being sick. Worf Had the Flu is a related trope where a Badass who suffers a lapse of badassery can claim some justifying excuse (such as illness) for her loss. Commonly seen in those Obsessed with Perfect Attendance, who refuse to miss a day of work or school even if they really should stay home. See also Feigning Healthiness.