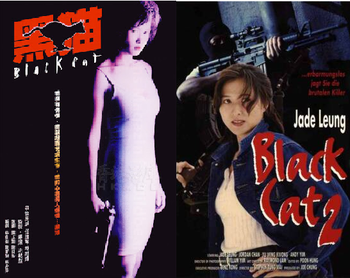 Starring Jade Leung as Catherine in the first movie, and Erica in the second. Yes, they are the same characters.
Advertisement:

Black Cat is a 1991 Hong Kong Girls with Guns action movie and a loose remake of Nikita, but with action, violence, and Fanservice turned up to eleven. Starring Hong Kong B-movie regular Jade Leung in her onscreen debut, Leung's performance in the movie earns her the 1992 Best New Performer Award at the 11th Hong Kong Film Awards, subsequently launching her career in cinema.

Catherine (Leung) is a student in Vancouver, who after a nasty run-in with a trucker leads to her accidentally killing him, and later a police officer, Catherine ends up nearly losing her life from being shot by the police. Waking up in a top secret government facility, Catherine discovers that she is now declared dead by the public, and has a new identity: Black Cat, an elite assassin and killing machine. Under the tutelage of her ruthless handler Brian (Simon Yam), Catherine ends up going through a killing spree before suddenly falling in love with Allen, a Nice Guy who made her rediscover her true self before her brainwashing.

There is a sequel, Black Cat 2 released a year later, where Catherine - now inexplicably renamed Erica - is sent to Russia on another assignment, this time being paired up with CIA operative Robin (Robin Shou, Mortal Kombat: The Movie).