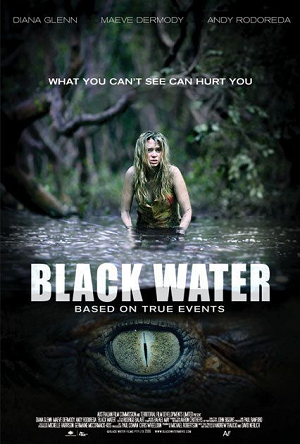 Are you ready to die?

While on vacation in Northern Australia, Gracie (Diana Glenn); her husband, Adam (Andy Rodoreda), and her younger sister, Lee (Maeve Dermody), decide to take the Blackwater Barry tour in the swamp for fishing. Their guide, Jim, uses a small motorboat and takes the tourists along the river to a remote spot. When they stop, they are attacked by a huge crocodile that capsizes their boat and immediately kills Jim. The three survivors climb a tree and, when they realize that help would never come to rescue them, they decide to try to find a way out of their sheltered location. However, in the muddy water, their boat is flipped and the crocodile stalks the trio under the water.

The director would later go on and direct a Spiritual Successor titled The Reef. Not to be confused with the American Private Military Contractor company of the same name.