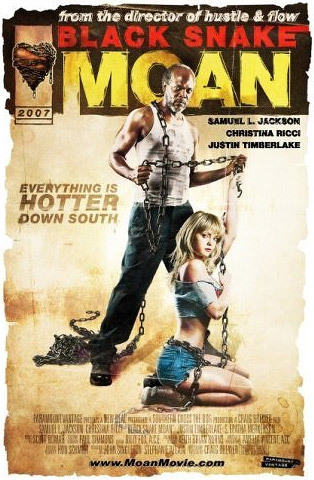 To save his soul, he must save hers.
Advertisement:

Fun little upbeat slice-of-life comedy where some nice Southern folks learn some fun things together about friendship and the blues. Memorable for the scene where Samuel L. Motherfuckin' Jackson plays an electric guitar in a thunderstorm, even if for no other reason.

In real life (aka not Sarcasm Mode), the 2006 film is about a cantankerous former Blues singer/guitarist named Lazarus (Samuel L. Jackson) who has fallen on hard times. His wife leaves him for his brother and his faith in both God and other people is rather low. Then he meets Rae (Christina Ricci): a nymphomaniac struggling with her sex addiction and other psychological problems now that her boyfriend Ronnie (Justin Timberlake) has gone off to the military. Lazarus finds her beaten and unconscious in the road near his home and decides to "cure" her: cure in this case standing for chaining her to a radiator. However, after much friction, Rae slowly starts to listen to what Lazarus has to say about life through his music and through learning how to deal with her problems.

A polarizing film, it made quite a splash with its controversial subjects that include but are not limited to rape, sexual addiction, parental abuse, anxiety disorders, and religious outlooks. Needless to say, it is certainly Not Safe for Work as the movie's TV Tropes page illustrates below.