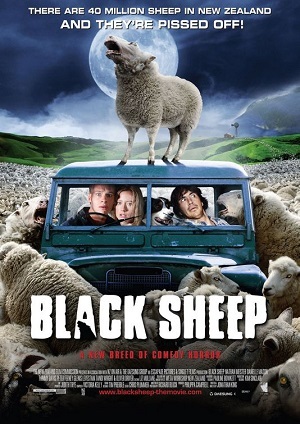 Experience: What's wrong with you?
Henry: Ovinophobia, my therapist calls it.
Experience: What's that?
Henry: (As they're being attacked by a killer sheep) Just the completely unfounded and irrational fear that one day THIS WAS GOING TO HAPPEN!
Advertisement:

Henry Oldfield and his brother Angus help their father raise sheep. A tasteless prank involving Henry being attacked by his older brother who's wearing the skin of Henry's beloved pet sheep Dudley, followed by news of their father's death due to an accident, results in Henry developing severe ovinophobia, fear of sheep. This causes him to leave New Zealand and not return until his brother asks to buy Henry's share of the farm, as Angus plans to use modern bioengineering methods to create better sheep. As Henry is shown about the farm, members of an Animal Wrongs Group, Grant and Experience, steal a sample from Angus's laboratory and accidentally release a bioengineered lamb - which then proceeds to infect the rest of the flock, thus creating hordes of bloodthirsty sheep.

Not to be confused with the Chris Farley/David Spade film.