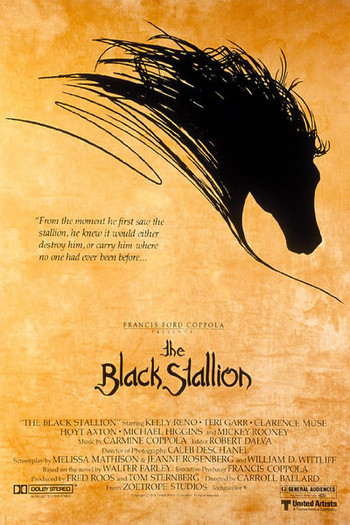 A book series by Walter Farley beloved by little girls everywhere. The first books deal with Alec and the Black, a half-wild Arabian stallion he comes across while on a cruise. When the ship crashes, Alec and the Black are stranded together on a desert island. He builds a bond with the horse, and both are eventually rescued and returned to New York. Home again, Alec meets up with an old racehorse trainer and convinces the man to train him and the Black. They then enter a match race as a wild card between a champion of the West Coast and a champion of the East. Obviously, they win.

The second book details Black's real owners stepping forward to claim him, and Alec has to venture back to Arabia to stake his claim on his favorite horse. Other books follow the exploits of the Black's son Satan and his other foals. The Black himself is still the main character throughout most of the series.