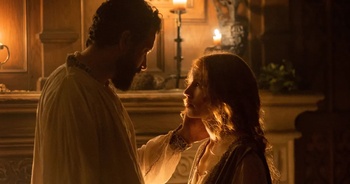 This usually occurs in men towards their step-daughters, but it can occur in other combinations as well. It's almost always non-consensual, though some rare pairings do result in a consensual relationship. Sometimes, this trope is inverted with someone coming onto their step-parent, instead of the other way around. This trope is usually unrelated to Wicked Stepmother. A wicked stepmother is usually physically or emotionally abusive, but very rarely do they delve into the realm of sexual abuse.

Despite also being biologically unrelated to their children, this almost never occurs in adopted parents, and when it does it's usually treated on par with biological Parental Incest. This is because most adopted parents adopt their kids at a relatively young age. Foster parents, however, sometimes get treated negatively due to either foster kids usually being older or stereotypes that people only foster for money, rather than because they genuinely care for kids.

This trope is a type of Unequal Pairing and is a result of Abusive Parents.

Compare to Creepy Uncle (who is also often not blood-related to their niece/nephew) and sub-trope to Parental Incest. Often related to Wife Husbandry, Love Father, Love Son, and Rape as Backstory.