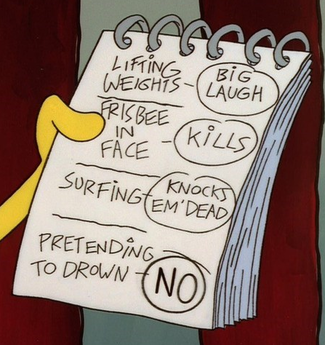 That last one should be pretty obvious.
"Even I'm offended by this. And I'm a fat Southern sheriff."
— Chief Wiggum lookalike, The Simpsons, "Love, Springfieldian Style"
Advertisement:

Some tropes reference things that really should not always be Played for Laughs, but for some reason often are. One of the consequences of comedies using schadenfreude is that they can tread on subjects that are quite serious to some people. An attempt at a joke on such subjects can easily come across as insulting, offensive, or cruel, earning the reaction, "Dude, not funny!"

The academic terms "dark humor," "black humor," or "tragic farce" apply to some examples, although the exact execution is somewhat different. Black Comedy is not about making jokes at the expense of groups, but rather about using Irony and Fatalism to make them seem amusing while still showing their seriousness. "Dude, Not Funny!", on the other hand, is the reaction you get when a work attempts Crossing the Line Twice but only crosses it once. While black comedy may help people find humor in the midst of their suffering or misfortune, it's less helpful to laugh at the suffering itself as comical since, well, it isn't.

The reaction can also come from using humor against Unacceptable Targets. The saying goes that comedy should "Punch up, not down": mocking powerful authority figures may be bold and edgy, but mocking marginalized or oppressed people just makes you look like The Bully.

A "Just Joking" Justification is usually not much help here; the problem isn't that people didn't understand the attempt was intended as a joke but that they found the joke to be about something that's no laughing matter.

If something that was funny falls into this following some related event in the real world, see Harsher in Hindsight. Also compare Distanced from Current Events, where an event's recency heightens the insensitivity.

The Politically Incorrect Villain is portrayed this way on purpose because Evil Has a Bad Sense of Humour and cracking a tasteless joke may be a good way to highlight this. It may also overlap with Comedic Sociopathy, in rather the same way that treating sensitive subjects callously in real life would overlap with actual sociopathy. Conversely, a villain who plays it with enough finesse may be considered Too Funny to Be Evil.

A gifted Insult Comic’s skill largely depends on being funny enough to avoid this reaction while still being rude.

SpongeBob is turned down by yet another "ripped pants" joke.

SpongeBob is turned down by yet another "ripped pants" joke.